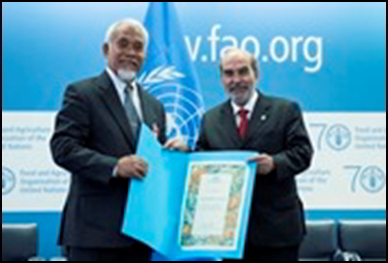 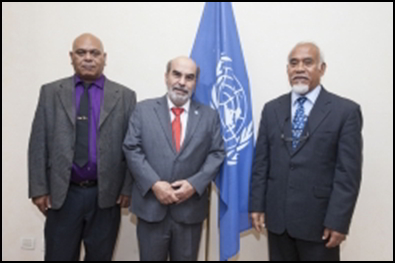 The FAO Director-General praised Tonga's effort, as it is one of the 34 countries (plus the European Union on behalf of its 28 members) that have acceded to the Port State Measures agreement, the world's first international treaty specifically aimed at tackling Illegal, Unreported and Unregulated (IUU) fishing.

"This agreement is very important for us, especially in the Pacific, because when we talk about Illegal, Unreported and Unregulated fishing we are talking about tuna fisheries, and this is the renewable natural resource that all the Pacific Island Countries share," the Minister said in remarks after the meeting. "We need to strengthen the capacity of individual countries to be able to enforce the law so that all fishing vessels follow," he added noting the strength of regional cooperation.

The FAO –COFI Meeting is conducted on a biennial basis with focus on the FAO Fisheries and Aquaculture strategic development plan (2010-2019) and its implementation processes, which include the Asia & the Pacific regions. Basically, the main function of the FAO-COFI Meeting is to adopt reports and recommendations from various sub-committees for both capture Fisheries and Aquacultures in-line with the FAO Code of Conduct for Responsible Fisheries (1975).

The outcomes of this meeting will enable Tonga to put into force the implementation of the Port State Measures agreement to impede Illegal, Unreported and Unregulated (IUU) fishing in the Tongan EEZ. Not only that, but funding has been allocated to FAO member states to assist in implementing this agreement, with Tonga included.